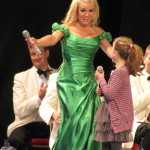 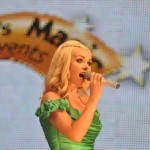 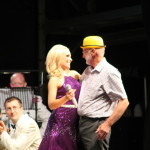 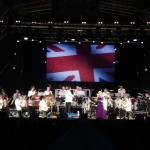 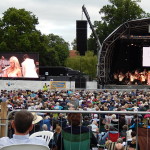 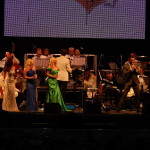 The stunning setting of Victoria Park made for the perfect backdrop to an evening with Welsh mezzo-soprano Katherine Jenkins as part of the It’s Magic 4 day Concert Weekend.

The set reflected Jenkins’ eclectic tastes, including a mix of everything from Verdi to Leonard Bernstein’s Somewhere from West Side Story.

Beginning with an orchestra-only version of Annie Get Your Gun by Irving Berlin, Jenkins’ first appearance was for Canto Della Terra by Bocelli.

She was later joined on stage by special guests Amore, a quartet who met at The Royal College of Music.
Their rendition of Bella figlia dell’amore showcased the talent of the young group and gave Jenkins chance to change gowns.

She returned to the stage for Dvorak’s Song to the Moon and, a highlight of the evening, the reverent Pie Jesu.

Between performances, Jenkins is friendly and genuine with the picnic-munching masses and her love of what she does makes her a very likeable performer and even invited up on stage Eva who sang unaccompanied to the delights of the audience Pie Jesu.

The first half ended with I Could Have Danced All Night which she last performed during one of the recent Jubilee concerts at Buckingham Palace.

The second part of the performance began with an orchestral tribute to composer and conductor Michel LeGrand, best known for his film scores including The Thomas Crown Affair. Jenkins then returned, in yet another dress, for the haunting ballad Hallelujah by Leonard Cohen followed by Love Never Dies.

Amore accompanied her for a thrilling rendition of Brindisi from La Traviata followed by the quartet alone performing two songs including the Nessun Dorma.

Jenkins finished her set with Over the Rainbow, La Vie on Rose and Time to Say Goodbye.

And ending on a more rousing note, the audience happily joined in for a final sing along with a medley including Rule Britannia, Jerusalem and Land of Hope and Glory.