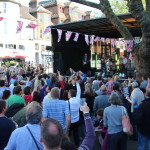 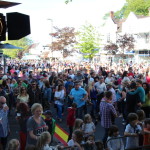 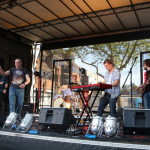 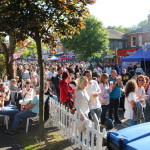 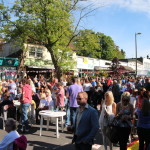 The sun shone capturing a record turnout at this year’s Broadway Sound.

A feast of music from 18 performers was organised.

It’s Magic always dedicated to promoting new talent in the area encouraged performances from ‘Catching Mangoes’, ‘Fleet’, ‘Tusk’ & ‘Konfuzion’ from the recent Mid Sussex Battle of the Bands to take to the stage early on in the day.

Lunch time performer Nigel Bagge with his smoky vocals, sensitive guitar playing a selection of classic acoustic to contemporary electric Blues had visitors chilling out.  Not long after we had the sound of original rockin’ rockabilly-style country music from The Chubbnuts.

Then there was time for nostalgia with Mid Sussex Brass Band, performing favourite classics from this traditional British Brass Band.

Late afternoon, whilst the air became still, the audience were struck by the amazing operatic voices of Nicholas Ransley & Michael T Barber in Classical Showtime.

As the sun went down more visitors arrived and back by popular demand the Alter Eagles provided the most accurate live recreation of the Eagles music possible.  Timeless lyrics coupled with the deep tapestry of vocals, intricate instrumental arrangements and unmistakable guitar riffs created a powerful performance.

The evening ended with Songs in the Key of Stevie an 11 piece band performing Stevie Wonder music, the whole street was rocking.

The festival, ran from 11am until 10pm