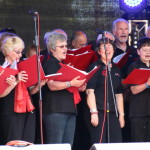 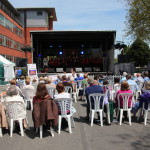 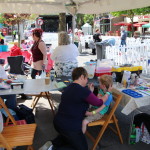 The Angels were on the side of music fans when sunshine blessed the start of the Broadway Sound music festival at Haywards Heath a great success on Sunday, May 26. The Robbie Williams hit Angels was the closing number for one of the first acts on stage, InChoir. (pictured) Other early acts included Vocademy, Chameleon and solist Charlie Jackson, as well as the 4Tune Seekers and the Mid Sussex Brass Band. Jimmy The Juggling Jester amused the children, instructing them in skills. Actor Shane Richie and the Prelude were cheered when they took the stage early in the evening, and the other acts closing the show were Soul Sister and the Supersonic 70s Show. The festival, ran from 11am until 10pm