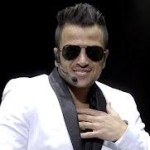 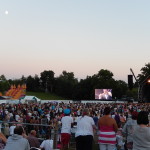 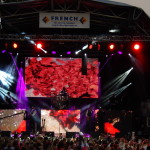 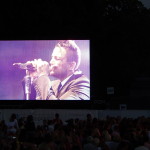 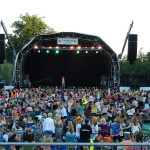 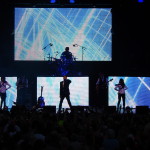 The noise at Peter Andre’s Show at Victoria Park on Friday 19 July, 2013 was not from the mega sound system but his screaming fans.  A giant video backdrop beamed out images throughout the show, changing from song to song. There’s moody Pete in a car, rainfall, umbrellas, red rose petals and crooning, suave Peter in a white dinner jacket.

His fun-loving side shined through and, in one amusing section, he appeared on stage all suited and booted James Bond-style, while the screen declares him to be “00P”.

The show enables him to get Up Close and Personal – and he gets very close to one of the lucky ladies from the audience, serenading her with a cover of How Deep Is Your Love. We’re told the night is also “about illusion” and magic tricks are weaved into the dance routines. It’s a clever addition and works well.

The show highlighted him as a charming, talented performer with the audience all leaving on a high.